Guy Gentile Made $4M In Beyond Meat, Sees 50% Downside By December 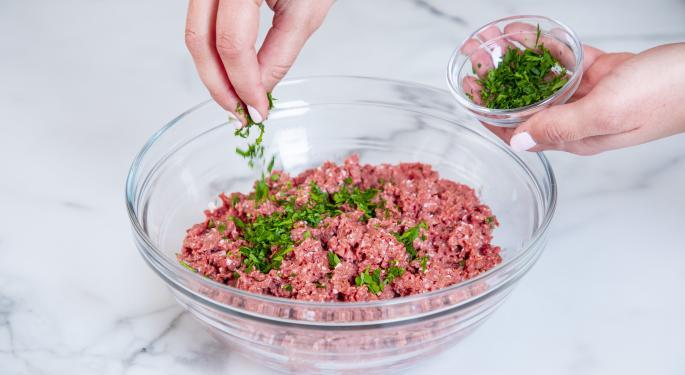 Beyond Meat Inc BYND dropped more than 14% on Tuesday morning after the company reported a second-quarter earnings beat and announced a secondary share offering just months after its IPO. It was a rough morning for Beyond Meat investors but an excellent day for traders, including Guy Gentile.

Gentile joined Benzinga’s PreMarket Prep on Tuesday and discussed his recent trading in the stock, which he said has netted him $4.2 million this year.

After a big day for Beyond Meat on Friday, Gentile said he sold weekly call options ahead of the Monday report as a way of betting on downside.

“You just have options positioning themselves for what could potentially happen, so you have people hedging their positions, you have CNBC telling people to buy it, that they should buy some shares, just retail getting pumped into this stock. And what I did [Monday] was I basically sold the $230 calls all the way up to the $270 calls, so I have an average price of maybe $255-$260 just in case it spiked in earnings,” he said.

Gentile believed market expectations had gotten so high for Beyond Meat that no matter what they reported on Monday afternoon, the stock would likely drop to between $165 and $185 on Tuesday. As of late morning trading, Beyond Meat’s low for the day was $183.50.

Gentile said no institution in their right mind is buying Beyond Meat at a $14 billion valuation. He said Beyond Meat may find institutional buyers at $60 per share, but certainly not at $240.

“The only reason why it’s here is because of the overnight interest fees and the small float and cheap options [from last week]…and also shorts being trapped,” he said. He said many short sellers were too aggressive with Beyond Meat in the beginning.

Gentile said activity in the options market late last week suggested Beyond Meat was approaching the end of its big move, noting that large pre-market moves to new highs are capitulation moves and signs that clearing firms are attempting to blow people out of their short positions.

In light of that, Gentile said he bought weekly put options, giving him the right to buy back the stock at a lower price.

At that point, Gentile said he cashed out of his positions by exercising his put options and selling his calls.

Gentile said as long as Beyond Meat stays below the $220s this week, he should be able to bank the roughly $400,000 in premiums he collected on those sales.

Gentile said the sell-off is not fully pricing in the 30% theoretical downside suggested by the new offering. He plans to once again take the short side of the Beyond Meat trade this week.

“I think it’s going to overshoot to the downside. I think we see $150 by the end of the week,” he said. “I’m going to sell a call spread this time for next week, probably the $200s and hedge with the $210s, and I’m going to take that premium and buy puts with it that expire this week as well.”

Selling call spreads is an options strategy that involves buying call options while selling the same number of call options at a lower strike price. This strategy would allow Gentile to profit if the stock falls, but also provides downside protection if it falls too far.

While he’s trading exclusively in the short-term, Gentile said he anticipates Beyond Meat will trade under $100 by December given the stock’s supply of buyers has seemingly been exhausted.

Beyond Meat shares recovered throughout the morning session, trading around $211.87 at time of publication, down 4.6% on the day.

Listen to the full interview with Gentile at 1:00:20 in the clip below.

PreMarket Prep is a daily trading show hosted by prop trader Dennis Dick and former floor trader Joel Elconin. You can watch PreMarket Prep live every day from 8-9 a.m. ET here. The replay can be found on Benzinga’s YouTube channel, and the podcast is on iTunes, Google Play, Soundcloud, Stitcher and Tunein.